...of the County of Missoula and the State of Montana demand that the Montana State Legislature perform a full forensic audit of the Missoula County 2020 General Election. 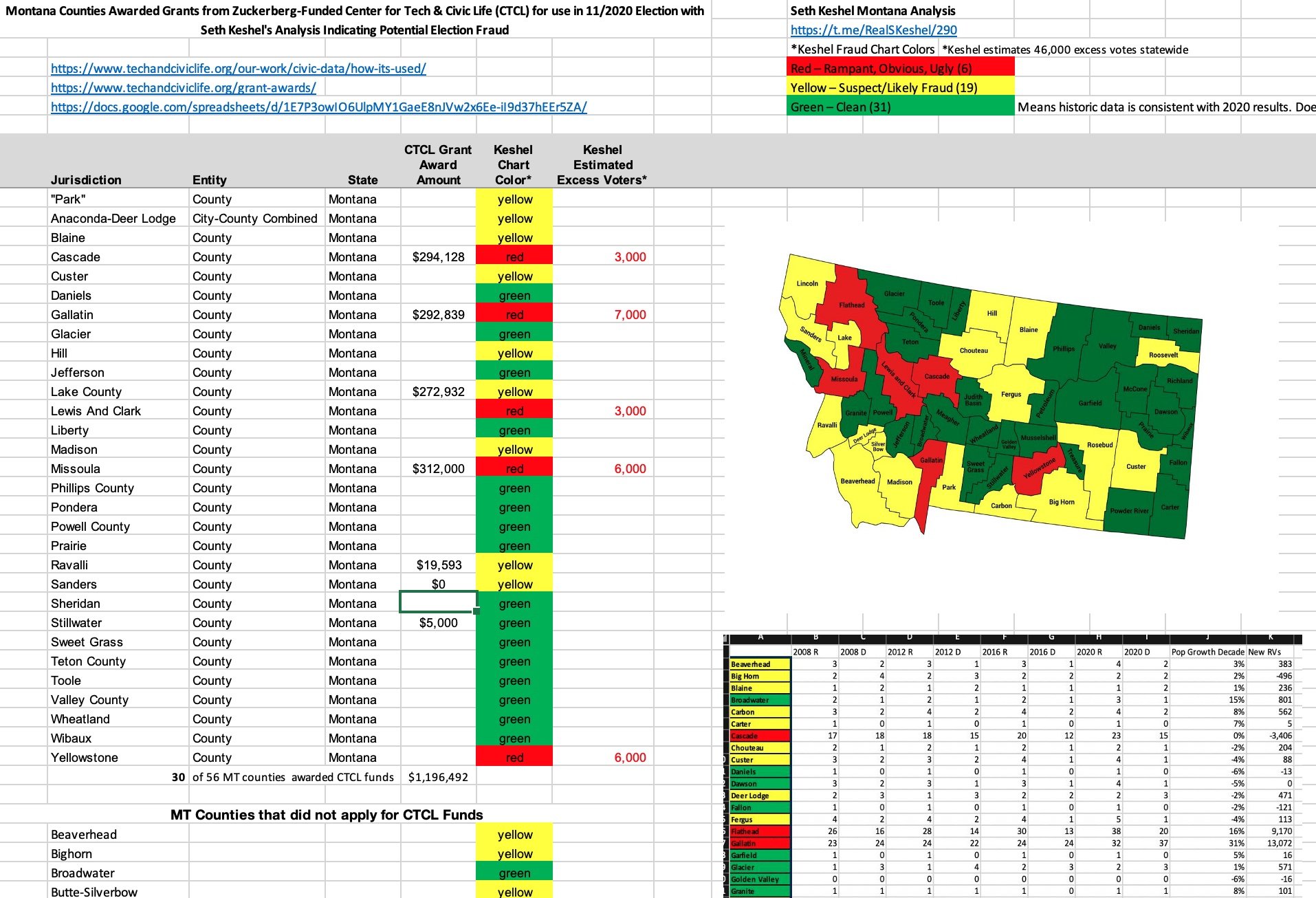 This spreadsheet includes Montana Counties that were granted money from the Zuckerberg-funded Center for Tech & Civic Life paired with election data analysis from Seth Keshel.

Tschida Letter to Secretary of State 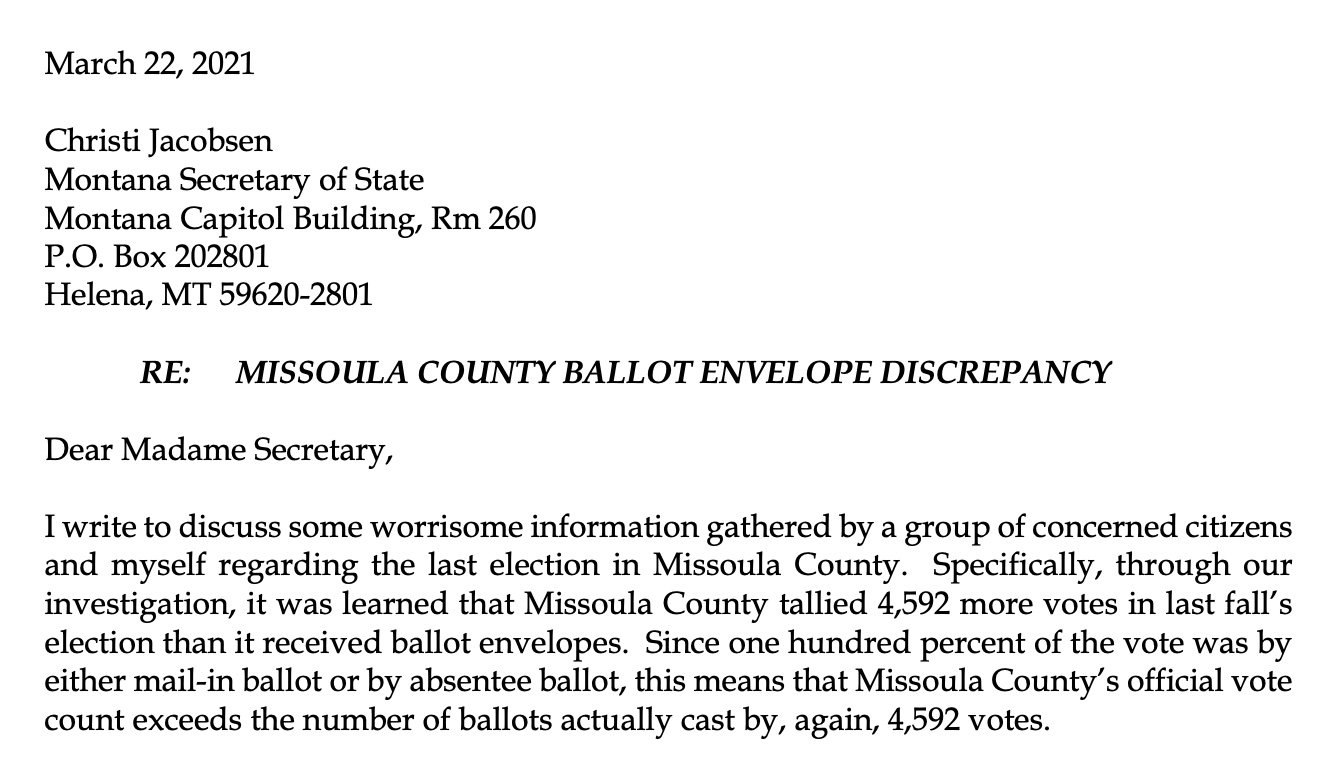 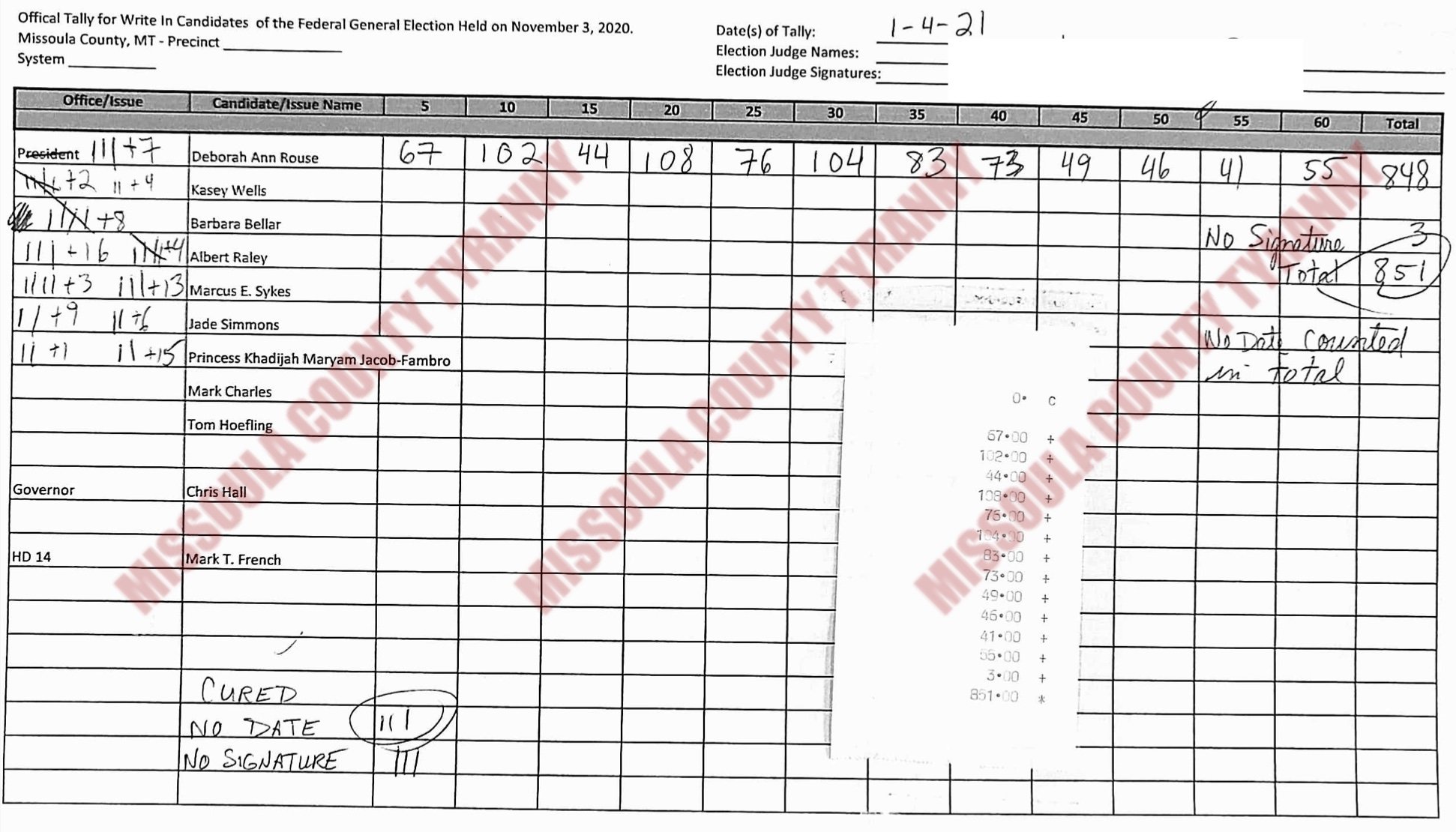 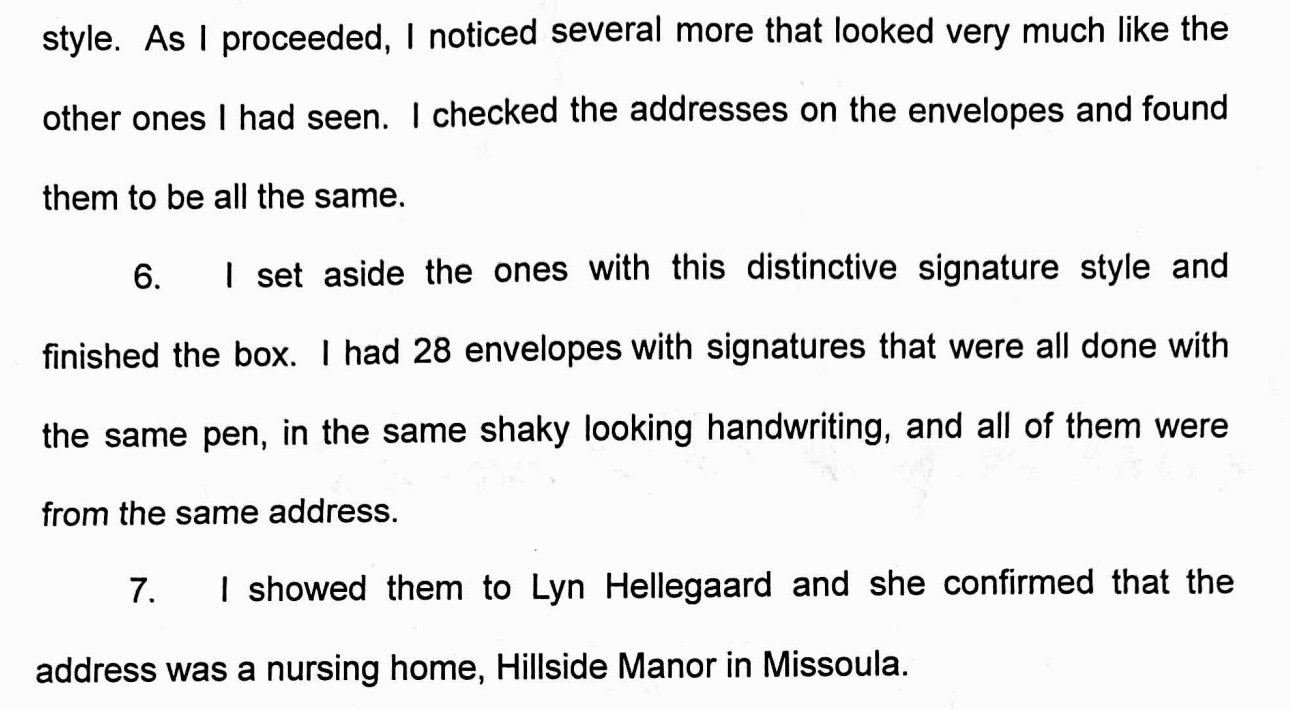 An affidavit submitted by one of the ballot envelope counters detailing 28 ballot signature envelopes signed with the same distinctive signature from the same address, Hillside Manor. 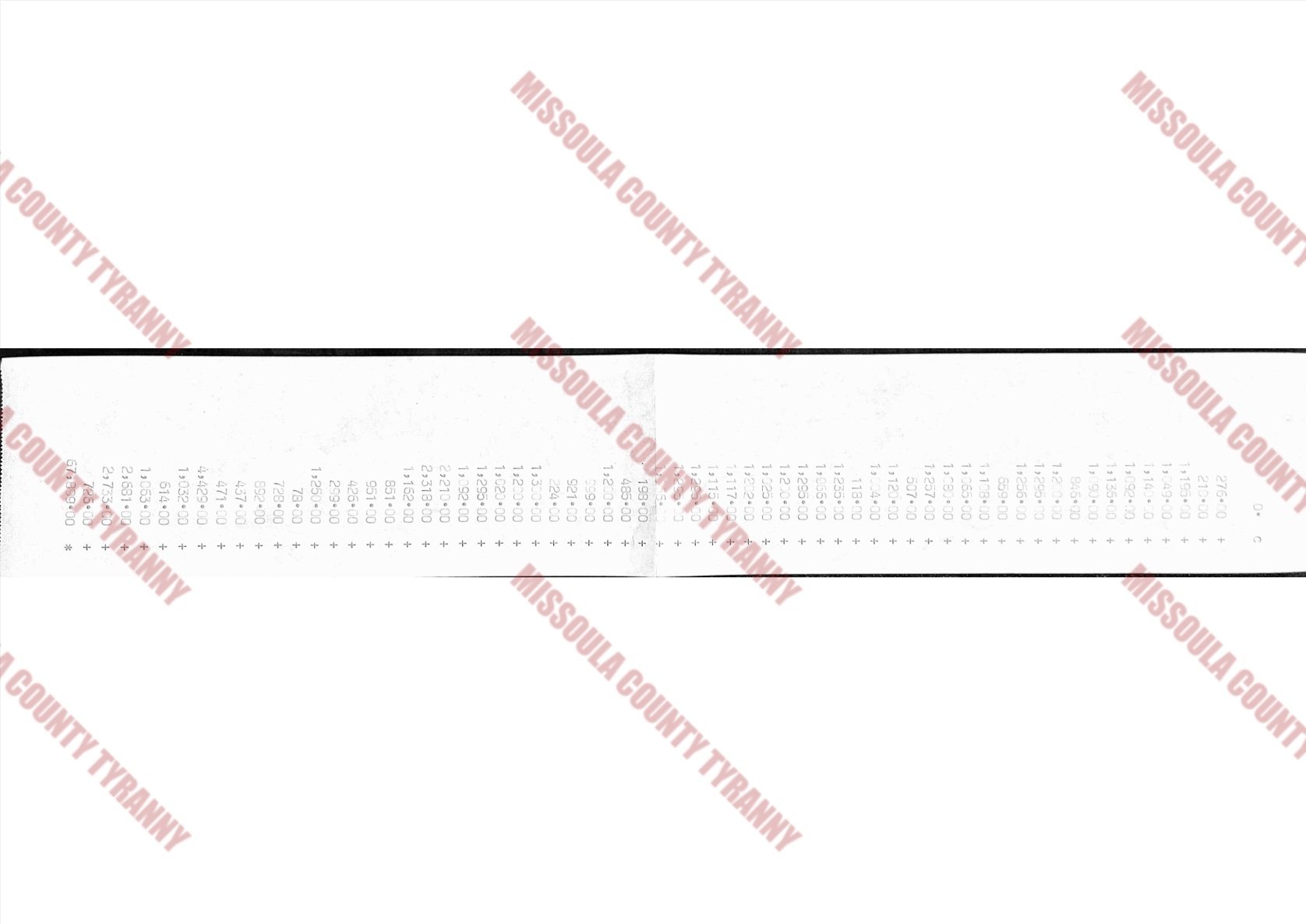 The adding machine receipts printed from calculating the subtotals and total.

Newsmax host breaks down the findings of the 4,592 unaccounted for ballots from the review of ballot signature envelopes in Missoula County in January.

An interview with Dr. Douglas G. Frank. Dr. Frank has reverse-engineered the algorithm he refers to as "the Key" that used 2010 US Census data to provide election fraud perpetrators the population of voters needed to fraudulently submit ballots for.

Why do we need
an election audit? 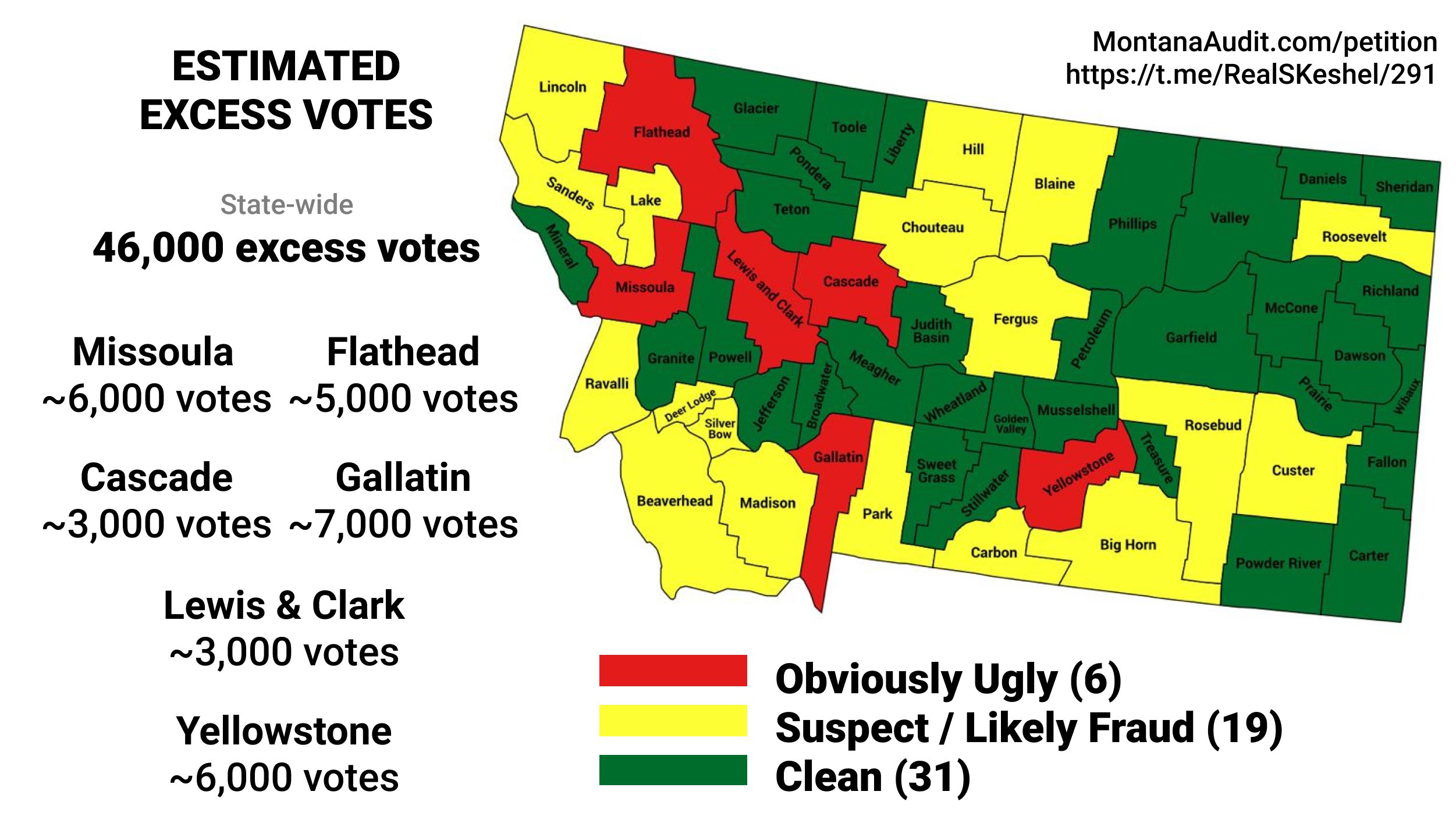 Missoula County Elections made national headlines earlier this year after a review of ballot signature envelopes from the 2020 General Election conducted in January found that 4,592 out of all 72,491 mail-in ballots—6.33% of the ballots cast in Missoula County in the 2020 General election—did not have matching signature envelopes, a state election law requirement, making it illegal to count those votes.

When asked by Attorney Quentin Rhoades, a lawyer for the audit group, what accounted for the discrepancies, Missoula County Elections Administrator Bradley Seaman reportedly, “appeared extremely nervous and had no explanation,” according to a RealClear Investigations report filed by investigative reporter John R. Lott.

Brad Tschida (HD 97) helped the ballot signature envelope review group gain the access they needed to conduct the review in October of 2020. Tschida sent a letter to Montana Secretary of State Christi Jacobsen detailing his concerns about the review findings and calling for additional access to ballots for counting and inspection. Tschida also asked for information related to ballot inventory and printing quantities. Elections Administrator Seaman purchased a Balotar Ballot Printing machine in 2016.

A "fact-check" from Seaman regarding the discrepancies discovered by the ballot signature envelope review team does not clearly refute the review findings. In emails to Missoula County Tyranny, Seaman eschewed the idea of taking seriously the findings of the citizen review panel (oversaw by his own elections team) by inviting the review team to sue the county saying, "we would welcome them to substantiate their claim with a legal challenge to the election."

Despite being baffled when confronted with the ballot signature envelope discrepancy, Seaman's fact-check about the discrepancies amounted to ad-hominem attacks on Missoulians concerned about election integrity. He accuses them of "intent to mislead voters." Seaman could have taken the data from the reviewers and done another count if he cared about election integrity. Instead, he spuriously declared the numbers incorrect.

Missoula County Tyranny asked Seaman why the numbers were incorrect. In response to our question, "When officials told the review group that their count was ”incorrect,” what was the process officials used to determine that the reviewers count was incorrect?" Seaman shared, "We compared the number from their single hand-count[1] of affirmation envelopes that did not include a process to double-check[1] or process to confirm their results[???] to the number generated by our process[2]."

[1] According to Tschida's letter to the Secretary of State, two people were at each table to count the ballot signature envelopes. Missoula County Election administrators oversaw and even shared tabulation sheets (scanned PDF) to count votes. These tally sheets are used during the course of conducting elections. 19 volunteers came to count ballots.

[2] "the number generated by our process" means the results of the election.

Simplifying: We compared the number from their single hand-count of affirmation envelopes that did not include a process to double-check or process to confirm their results to the number generated by our process.

So, Seaman has declared the numbers incorrect simply because they do not match the original count from the election. That doesn't sound like "concern for election integrity." If the review process was so truly flawed that the results could not be trusted, Missoula County Elections Administrator Bradley Seaman has not demonstrated it.

As Missoula County Elections Administrator, Bradley Seaman has been hostile to the actions of the citizens of Missoula County to seek the truth regarding the glaring discrepancies found in the review of ballot signature envelopes his own team oversaw.

A legal challenge should be brought against the Missoula County Elections Administrator by the Montana Legislature.

A River of Doubt Runs Through Mail Voting in Montana

State Legislatures across the country including from Alaska, Colorado, Georgia, Nevada, Pennsylvania, Virginia, and Wisconsin have sent delegations to Arizona to tour ongoing election audit proceedings considered to be the “gold standard” by visiting legislators. A similar election audit should happen in Missoula County.

RSS Error: A feed could not be found at `https://www.missoulacountytyranny.com/topics/elections/election-integrity/feed/`; the status code is `404` and content-type is `text/html; charset=utf-8`